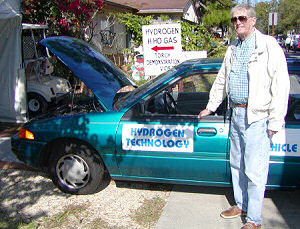 While his unique electrolysis process – working simply with water and electricity – was originally designed to work in welding factories as a replacement for acetylene torches, a whole new application has come to light from Denny Klein, who recently filed a patent on his solution. He has converted his 1994 Ford Escort to run either as a water-gas hybrid, or on water alone.

While the tip of the welder is cool to the touch, the water-powered torch can burn through charcoal and get tungsten to “light up like a sparkler.” But when it comes to powering a vehicle, this prototype could drive for 100 miles on only four ounces of water. Technically, the car isn’t running on water, because the H20 is converted to HHO gas. This is said to provide the “atomic power of hydrogen”, while maintaining the “chemical stability of water.”

He has already attracted the attention of an unnamed American automaker, and Klein has been invited to the Washington to demonstrate his technology, with word that he is now working on a water-gasoline hybrid Hummer for US military.

Of course, none of this has been confirmed, so it’s hard to say whether Mr. Klein’s invention is a) for real, b) actually usable or c) a complete hoax. For example, many have said that the energy required to convert H2O to HHO is greater than that produced when the HHO is burned.

Update 06/18/2008: Developed by Genepax in Japan, this commuter vehicle is able to travel at 80km/h for one hour on just a single litre of water. The concept is much the same as other fuel cell vehicles, except you don’t need to feed the car with straight hydrogen. Read More.