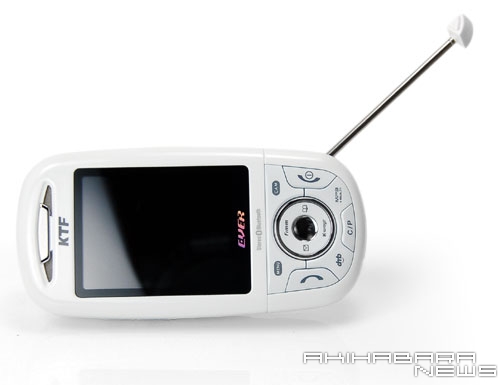 I have a big soft spot for slider phones. Maybe it’s the larger displays or just the cool feeling of sliding open a phone rather than flipping or swivelling. That’s why I can’t help but to be inclined to fall in love with the EV-KD330 from KTF.

As a Korea only device (and thus, the start of a falling out of love), it only starts to make sense that the EV-KD330 packs in integrated DMB for all your television watching while roaming the streets of Seoul. Don’t worry about getting lost either, because this cute white handset also features GPS functionality.

Other key features include a 1.3MP camera, Bluetooth wireless technology, and a built-in MP3 player. The form factor is sleek and almost Apple-like in its white appearance, but the core design and shape isn’t exactly innovative, looking much like any other mobile phone we will never see this side of the pond. Now, if they could bring us more of these kinds of phones over here, it’d be a different story altogether.