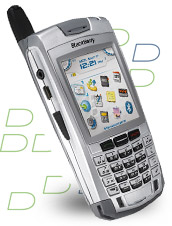 It’s not everyday that we get to scoff at our Korean counterparts, citing a technology that we have had for ages, whereas they are only receiving for the first time. We’ve gotten far too used to the reverse being true, with DMB and multi-megapixel cameraphones. South Korea may be a little late to the BlackBerry party, but they’re finally jumping on board. Soon to be available to corporate customers, the aged BlackBerry 7100i will be offered through KT Powertel.

BlackBerry is well respected in the industry as a leader in business-minded handsets, particularly their “push” technology. Indeed, their “total business communications solutions” will be a fine addition to KT Powertel’s lineup, but it is a bit of a shame for Seoul-based brethren that their first foray into the world of BlackBerry is a Nextel hand-me-down. Not exactly the way you’ll win fans in Korea.

One big appeal, however, is push-to-talk, so we’ll see how that floats with the people more accustomed to cellular phones with gigabyte hard drives, megapixel cameras, and support for every media format known to man.