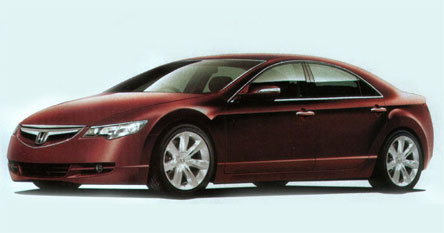 Maybe it’s just me, but it seems like Honda has been quite busy lately trying to brew up some new high volume vehicles. For example, the Fit made its North American debut not that long ago, providing city dwellers with a fuel efficient commuter that packs plenty of cargo space.

The next major project in the works seems to be the gearing up for a 2008 model year launch of an all new Honda Accord. This picture has been floating around the internet for about a week now, but there seems to be quite a few “reliable” sources that indicate this rendering is for real. Whether this will eventually transform into a new Acura TSX, or stay as the Honda Accord (the two models currently share many components) remains to be seen.

It’s funny, really, because people said that the new Civic looks like a shrunken down Accord, while those same people are saying that this new Accord looks like a stretched out Civic. Go figure.

Update 1/1/07: For an update on the 2008 Honda Accord, including the Acura TSX sedan and coupe variants, check out this post.

Update 1/8/07: The 2008 Honda Accord has been unveiled at the Detroit auto show, jump over for photos and discussion.

Update 4/18/07: The production model of the 2008 Honda Accord Coupe has been spotted in the wild with minimal camouflage. Check this link for details.