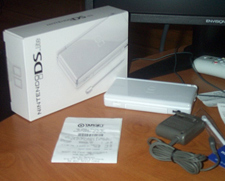 Okay take a deep breath my Nintendo fanboy brethren. While the DS Lite has been on sale in Japan for a while now, officially, us poor saps living in North America were told to wait until June 11th before we could get our hands on the smaller package with a brighter screen.

However, it seems that a few big box stores have ignored Nintendo’s requests and have already started selling the DS Lite. According to several reports, you can waltz into certain Target and Walmart stores TODAY and grab the diet-sized, “touching is good” machine. A few comments on the Joystiq site have confirmed this rumour. Cries of joy have been heard ’round the country.

If you thought you heard someone scream out “Crikey!” from a distance, that might have been some of our Australian readers jumping up and down, because the DS Lite has been spotted for sale down under as well.