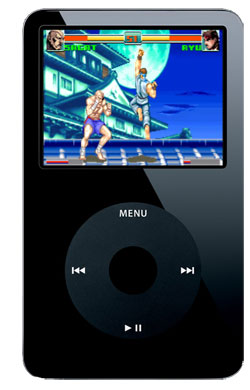 Chalk another one up in the rumour column, because Apple has another card up its sleeve it seems. Not content with throwing moving pictures into the mix with the iPod Video, Steve Jobs and crew are said to be working on some exclusive video games for their portable media player. Whether this means that there is an all new iPod in the mix, designed to fetch a few cool Benjamins from your wallet, or “simply” some firmware and/or software for existing units remains to be seen.

That said, word on the street is that it is the team behind iTunes that is working on the video game platform, clocking in the OT like there’s no tomorrow. So, much like how you never have to head out to a brick-and-mortar music store anymore to get your head bobbing fix, if this new platform comes to fruition, it’s possible that you’ll be able to grab some nifty button mashing goodness right from the comfort of your home PC as well.

It seems they’re taking this attempt (to take down the PSP, perhaps?) pretty seriously, as the rumour is that Apple has hired a bunch of gaming developers for some “unrivalled fodder to the entire gaming freaks world over.”