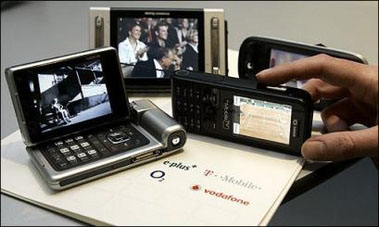 Just in time for the World Cup comes word of live TV broadcasts to mobile phones. The world championship of football (or soccer, to U.S. fans) is being contested in Germany starting in just a few short days. Rabid fans who contract with E-Plus, O2, T-Mobile, or Vodafone are the initial targets of a pilot project for live video.

The project will take place in Berlin, Hamburg, Hanover, and Munich. In addition to the football matches, you can watch other programming from government-run channels ARD and ZDF and from other channels.

If you’re football-mad like some of the folks that we know, you won’t mind paying the daily fee of 5 to 15 euros, and you surely won’t mind that the picture is so small. Granted, you wouldn’t want to spill your drink on your mobile in all the excitement of a goal scored by your favorite player, but we’re guessing that if you are watching a match with a drink in your hand, you’re not on the bus or the train or waiting for an appointment anyway. It’s those between-TV-set times that you need this sort of service.

You can also pull in feeds from 16 radio stations. The service will launch just in time for the kickoff, which is June 9, and will last until August 31.