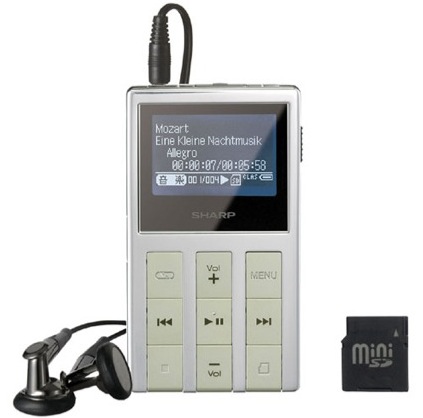 Sharp must have focused on making their new MP-B200 and MP-B300 thin instead of attractive. The two players are only 8.9 mm thick and weigh just 65 grams, but they have a bit of an odd look to them. The players come in either a 512MB capacity, or 1GB for twice the storage fun. If that isn’t enough storage capacity for you (and why would you settle for that little amount these days?), the players have a miniSD card slot for a little extra.

The players can play tunes in either MP3 or WMA format. The built-in FM transmitter let’s you play your MP3s through your home stereo or car stereo without needing a docking station or other accessories. It also sports an FM tuner, with the added bonus of being able to record off the radio as you listen (shreeks the RIAA). It comes in a choice of several color schemes and finishes, but I’m not sure that they help.

No word on where or when they will be released, or what they will cost, but with that FM recording feature you can pretty much bet it’s not leaving Japan.