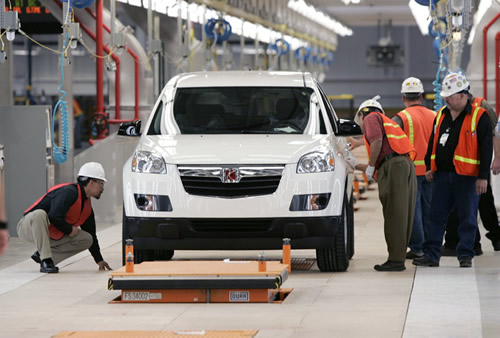 Saturn, as a brand, has made humungous headway in recent years. Not that long ago, the company released the Sky roadster, and the hugely popular convertible is in hot demand. There is a long waiting list for the cruiser, but Saturn has a whole lot more to offer. For the mountain-climbing junkies and those seeking a bigger, taller commuter vehicle alike, Saturn has a brand new sport utility for you to consider.

The 2007 Saturn Outlook just started rolling out of the Lansing, Michigan plant last week, and by the looks of things, it should be fairly competitive in an already crowded marketplace. Although they don’t plan on beginning full production until much later this year, the first few units have already rolled off the line.

Designed to fit just above the current Saturn VUE sport utility, the Outlook will be powered by a 3.6L V6 with variable valve timing, and linked to a new Hydra-Matic 6T75 six-speed automatic transmission.