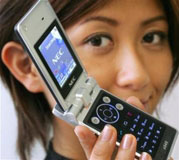 NEC and Matsushita are joining hands and taking their show on the road. In what would seem like a contradictory move, the two giants announced a partnership to pursue cooperation in the mobile phone sector while making it abundantly clear that neither individual operation would suffer as a result.

That kind of announcement sounds to us to be inherently suspicious in its good will. If someone goes that far out of the way to insist that nothing is changing, then you can probably expect that much will change.

Glaring through all the politeness, however, are the facts: Both companies are trailing Nokia and Motorola in the fierce mobile phone market, despite being among the first providers of 3G phones, and both companies are also reeling from heavy losses as a result.

One significant development that came to light was the presence of joint talks between NEC and Matsushita, makers of Panasonic, and with Texas Instruments, a leading manufacturer of mobile phone chips. Such a partnership could lead to a joint 3G assault on the Nokia-Motorola dominant positioning.

Both NEC and Matsushita expect big things in the year ahead. Perhaps a partnership is brewing after all. We wouldn’t be at all surprised to see Panasonic folded into the NEC stable in a glittering new 3G promotion that sports TI chips.