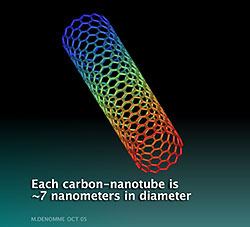 The march toward the nanotube computer goes on. The latest development out of IBM is that researchers there have solved a critical problem that had hindered their ability to control the position of carbon nanotubes in a transistor.

You know how chipmakers are always trying to pack more into less? Some in the industry are sounding the alarm that they’re running out of space, that they just can’t make those little wafers small enough anymore. One response to that alarm has been to use nanotechnology to sort of bypass the problem.

Carbon nanotubes are already with us, at least in the laboratory. They hold out the hope of powering processors that are super small and super fast without being power hogs. But until now, scientists have been able to control the placement of nanotube transistors.

It’s like building a house: If you can’t keep the foundation in place, then you can’t build the rest of the structure. The technology just hasn’t been there to control where those nanotubes are.

Now, however, a team of researchers at IBM have reported that they can indeed plunk nanotubes down where they want them, using a coating of molecules that bind only to metal oxide. Using magnetic technology as an inspiration, they laid down a thin layer of aluminum oxide on top of a group of transistor wires, then lathered the nanotubes with the special coating. The result: success.

It is not the end of the road, by any means, the researchers insist. Manufacturing carbon nanotubes in the first place is still expensive. Add to that the cost of the oxidation process needed to guarantee placement, and you have even more costs.

The goal is to spend money to make money, however. Researchers believe that nanotubes hold the key to bigger and better on smaller and smaller. We shall see, relatively speaking.