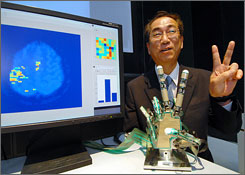 Maybe you’ve seen an episode of a science fiction show in which a person has wires connecting his head to a machine. The suggestion is that the guy is giving the computer or robot or whatever it happens to be, instructions via brain waves. If the good folks at Honda have their way, that fiction will be fact sooner than we might think.

A recent demonstration in Tokyo showed something that would send chills down our spines – a robot mimicking the thought commands of a person. An MRI machine, like the ones used in hospitals and medical clinics, was the instrument of transmission. The person moved his hand, making three significant patterns. Mere seconds later, the robot did the exact same things in the exact same order. One of those was a V for Victory sign.

The MRI machine had taken a virtual snapshot of what it saw the person’s hand doing and then relayed that information to the robotic hand, which followed the set of subroutines transmitted to the letter. Honda calls this device a brain-machine interface. Its main selling point is the absence of wires sticking out of the person’s brain. (That, at least, puts us somewhat at ease.)

The potential uses of such technology are vast. In medicine alone, such functionality can be used to power long-distance surgery via robotic hands and a host of other tasks that might require on-site presence of a person or perhaps endanger that person. Such technology could be used, for instance, to power a machine to extract people from a burning car or a raging river. The robotic hand could be inserted into the fray without risk to the person doing the rescuing, who would be at a safe distance but directing the action via the MRI machine.

More commercial possibilities exist as well. One’s name is Asimo. That would be, as you probably guessed, Honda’s new bubble-headed robot, which can talk and walk and dance but can’t do anything you or I tell it to doâ€”yet. Honda hopes to someday marry the MRI machine technology and that used to power Asimo, for the true interactive play experience. Just think, “Asimo, I want you to walk across the room” and it would do it. Far off? Not very, according to Honda.