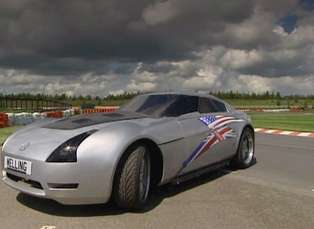 Some may say that the styling appears a little subdued on this latest offering from Al Melling, but throw down the throttle on the V10-powered beast of a vehicle and you’ll realize just how monstrous and aggressive the Melling Hellcat can be.

Some have compared the look of the car to the Nissan 350Z, others have pointed out the similarities to the Dodge Viper, but Al Melling will be quick to point out that his British sports-mobile is a creation all its own. In fact, he’s going to attempt to prove its superiority next year at Le Mans.

You’ll notice that graphics thrown onto the side of the Hellcat, depicting both British and American iconography. There is word going around that Melling plans to build four of these cars a month in his Rochdale, UK factory, but in addition to that, Roush Industries of the US – perhaps best known for their modified Mustangs – has reportedly signed on to pump out 100 Hellcats a month. Which makes you wonder, how much will this thing cost?

A video of this dream car can be seen here.