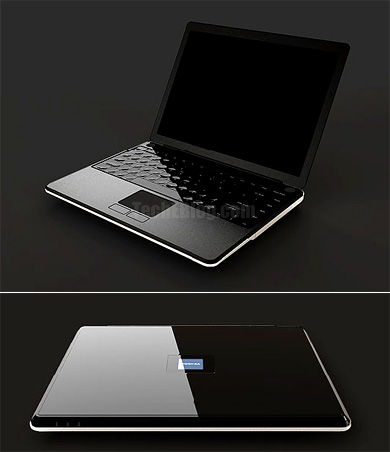 Jaren Goh is at it again. He already spilled the beans on his Sony Ericsson Black Diamond concept and the Obelisk PS3, and now he’s gotten around to tackling the notebook computer market. We’ve simply fallen in love with his chic, minimalistic designs, and nothing has changed this time around with the BlackBook concept.

Remember eons ago when anything silver became an incredibly hot commodity. And then Apple came around with glossy white everything and that became the hottest craze? Well, it seems like we’re undergoing a similar revolution these days with piano black items. As such, the cutting edge BlackBook from Jaren Goh sports the popular dark glossy shade as well.

There are several things that set it apart from the crowd, however, including the “indented tiled keypad”, chrome edging, and — perhaps most interesting of all — a small TFT screen on the cover where the logo would usually go. This provides for an extra screen, of sorts, allowing for further customization.

Keep your fingers crossed, and maybe one day we’ll see a production model.