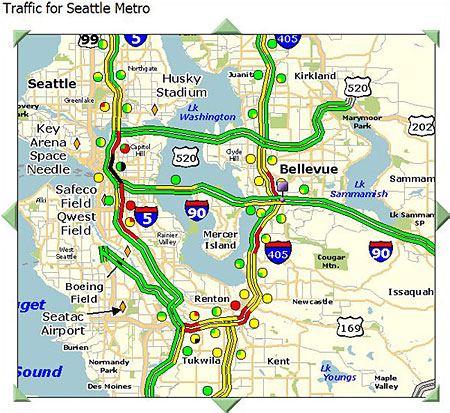 I don’t know about you, but one of the most frustrating things that you can deal with is a traffic jam. What if you could avoid the bumper-to-bumper action in the first place? That’s the idea behind Real-Time Traffic technology, and Inrex has taken it one step further, integrating historical data into their system.

Given a certain weather pattern on a particular date, there’s a good chance that the traffic the following year, on the same date, given the same weather, should be very similar. Inrex Traffic Services, a spin-off of Microsoft, has already developed this technology as part of its Dust Network. They’re saying that the amount of data they’re collecting is equivalent to if every speck of dust were to do it.

To collect the real-time traffic information, they’ve partnered up with 500,000 commercial fleet, delivery and taxi vehicles, and in exchange for the traffic data, these companies get a substantial discount on the Inrex services.

Although the traffic service isn’t available quite yet, Inrex already has several big name partners lined up, itching to provide the public with goods. These include Cingular, Magellan, TomTom, and Garmin.