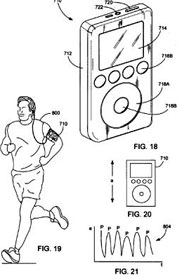 Another patent filed by Apple has been uncovered, meaning that a patent infringement lawsuit is bound to happen at some point. This time the patent, which was filed on November 24, 2004, is for a ‘Music synchronization arrangement’. This news, which is clearly directed towards use while exercising, makes sense given Appleâ€™s new partnership with Nike.

The patent features technology that goes beyond what the Nike+iPod Sport Kit can do. It has a mode in which the iPod will measure the tempo of your feet as you are running and choose songs with the same tempo. This would be done using a built-in accelerometer. It can also change the tempo of a song to match your tempo. The idea is that the music will help you maintain your tempo. Alternately, you can set a tempo and strive to meet and maintain it.

This leads to speculation about the emergence of a Sport iPod of some kind. If it happens, you have to imagine Nike will somehow be involved, too.