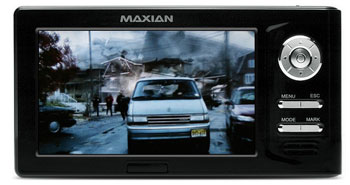 Some people may be attracted to the flashier looking players on the market that rock certain bells and whistles, but if you’re looking for a no nonsense, “I don’t care if I look boring” personal media player (and you happen to be over in Europe), then you can now pick up the Maxian T600. The basic-looking music and video player still packs in a fairly impressive set of features, however, despite the fact that it’s been on the Korean market for about seven months already.

Other features include voice recording (MP3/ADPCM), video recording, and a removable lithium-polymer battery pack. Weighing in at 260 grams, the Maxian T600 PMP should be selling now for about 450 Euros.