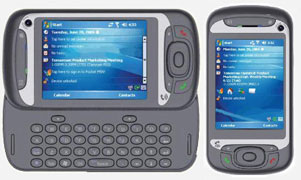 When it comes to smartphones produced by HTC, it really is nothing new to see them offered under different brands, sporting different names. After all, just about every handset offered from i-mate is really an HTC phone in a thinly-veiled disguise. The latest in this trend is the rumoured i-mate Jas Jam, a rebranded version of the hot HTC Hermes Pocket PC phone.

Apparently a blend between the company’s Jas Jar and Jam/Kjam line of phones (also made by HTC), the i-mate Jas Jam is also the same as the MDA Vario II offered through T-Mobile. The feature set is quite impressive, with Windows Mobile 5.0, a 300MHz processor, 2.1 megapixel camera, 128MB ROM, and 64MB RAM.

Perhaps the most attractive thing about this particular phone is its ability to connect to just about anything just about anywhere. In addition to the standard GSM and GPRS, the Jas Jam can also make use of UMTS, HSDPA, Bluetooth 2.0, and 802.11b/g Wi-Fi.