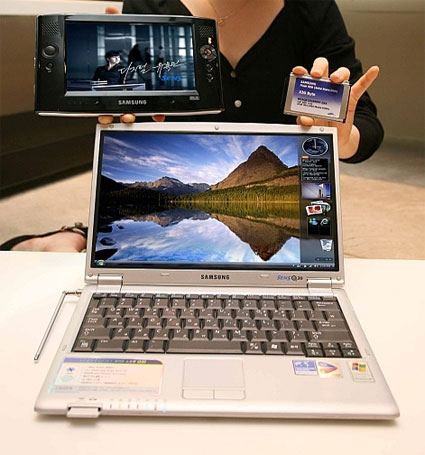 Soon after announcing a hybrid flash and traditional hard drive, Samsung has taken it a step further and announced the first two PCs embedded with 32 GB NAND flash-based solid state disks (SSD). The company says it marks the first time that NAND flash has been used in such an application and it is a breakthrough which will pave the way for the replacement of HDDs with flash memory drives.

The two PCs announced are a flash version of the Q1 UMPC announced earlier in the month, and the Q30 a notebook with a 12.1 inch screen. Both will be available in Korea starting in early June. Flash is looked at as a great fit for mobile computing because it is far more durable and resistant to shock that a traditional drive. A SSD can withstand a shock twice as strong as one which would cripple a HDD. It is also more resistant to spilled water.

There is no word yet if or when these models will expand beyond Korean borders.