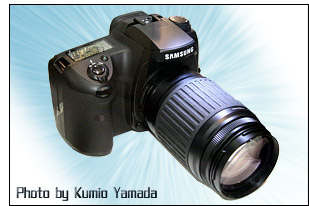 For most of us, a decent point-and-shoot camera is all you need to capture family memories, precious shots of you sipping on umbrella drinks while on vacation, and then ones later of you passed out on the lawn chair. However, there is an emerging group of enthusiasts who want more, and it’s not just the professionals out there. Of course, I’m talking about digital SLR cameras. Samsung released the 6 megapixel GX-1S back in January, and now they’re ready with a 10-megapixel followup, aptly named the GX-2.

We know that Samsung has continued their relationship with Pentax for this second offering, and it is being showcased over at the Seoul International Photo & Imaging Industry Show this week, but other than that, the information is pretty slim. It does bear a striking resemblance to a DSLR over at the Pentax booth, though. Chances are that the GX-2 will gladly swallow up Schneider and Pentax lenses.

As far as features, pricing, and availability, your guess is as good as mine at this point.