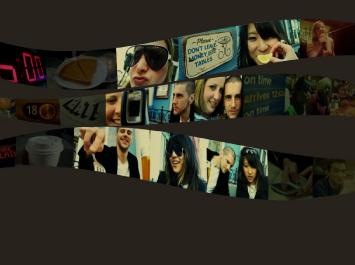 Just take a look around you and you’ll realize that just about everyone is sporting a cell phone these days, and the vast majority of them are rocking some form of a camera, even if it is a lowly VGA unit. Unfortunately, with nearly two billion cameraphones on the market by the end of this year, only a third of those people with the picture-taking handsets will ever share their snapshots. That’s why something has come along called “Radar”, made by Tiny Pictures to streamline the picture-sharing process.

One-to-one MMS messages can be far too costly, and as such, very few people actually make use of picture messaging. By contrast, Radar instantly broadcasts your sporadic picture to everyone in your network, either through their mobile web browsers or on their home PCs, at a much more affordable rate. Moreover, the system allows viewers to leave comments on your pictures.

Just imagine walking through your favourite boutique, not sure whether a particular article of clothing would suit you. You snap a pic and wait for your closest friends to leave a comment or two. It’s like going shopping with your girlfriends, without actually having them tag along.

Radar is designed to be a complete system, allowing pictures to be posted without configuration, and for snapshots to be chronologically, so people can see them as they happen throughout the day or they can be organized by last commented. With Radar, you can “share what you do, while you do it, with the people who matter most.”