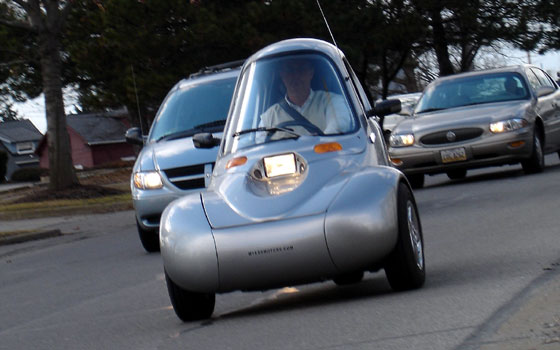 Hybrids might help you save a few dollars at the pump, but what if I told you that you could get your hands on a commuter vehicle that requires no conventional fuel whatsoever. The NmG (no more gas), as its been dubbed, is a three-wheeling, fully-enclosed vehicle that runs completely on electricity. We heard rumblings about this trike before when it was called the Corbin Sparrow, but the car is now being built by Myers Motors. And get this: it’s actually coming to the United States!

Of course, as a full electric, the NmG doesn’t come with a heck of a lot of power – a mere 30 horsepower – but that’s enough to get it roaring (tongue in cheek) up to 70 miles per hour. Don’t expect to go on a cross-country roadtrip with this thing, however, nor should you even be able to go cross-state, because it only has a range of about 30 miles. But hey, that should be enough to get to the office and back for a good chunk of urbanites.