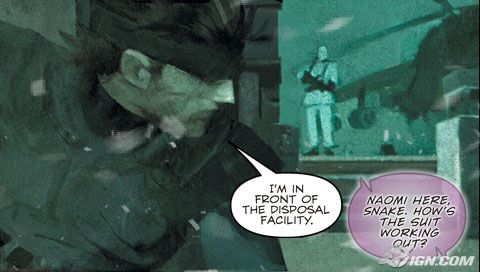 Seeing the surprise appearance of Solid Snake in the trailer for the upcoming Wii Smash Bros. title was huge news a couple of weeks ago, but this week, we’ve got a whole new entry to appease your need for Metal Gear Solid. In fact, it’s quite a bold project for the Sony PlayStation Portable, because the Metal Gear Solid Digital Graphic Novel “is neither a game nor a movie, but something in-between the two.”

The hand-drawn art is quite the departure from what you’re used to seeing on a television set, but it fits the gritty title quite well. MGSDGN (that’s a lot of letters, isn’t it?) is basically a digitized version of the graphic novel, and they’ve made it interactive, allowing gamers to gather up the pieces as a “puzzle.”

The characters involved include Meryl, Liquid Snake, Revolver Ocelot, and other well-known faces from the original Metal Gear Solid. The story is even deeper than when it was first presented, with extra exploration opportunities using “Mental Search Mode.” Basically, you pause the action and search the scene for “Memory Elements.”

Look for the Metal Gear Solid Digital Graphic Novel to hit a PSP vendor near you sometime next month.