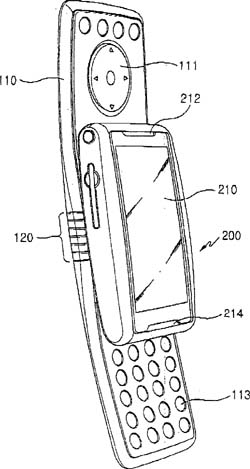 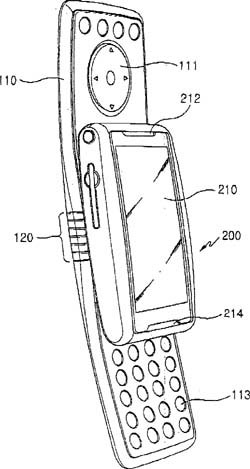 I can see the headlines now, and they involve the words “Samsung” and “World’s First”. In yet another move to innovate the industry, Samsung has found a “new” form factor that will wow the masses. This new breed of cell phone combines the flip-open goodness of a clamshell with the enjoyment and large screen of a slider. Enter: the sliding-clamshell.

Samsung has filed for a patent on the new design, which looks essentially like your basic bulky slider, but with a clamshell covering over the top of it. The hinge has the appearance of corrugated cardboard, and can stretch out a bit to wrap around the main part of the handset. They’re saying that this new form factor allows for a large LCD (as found on a slider), but with a protective cover (as found on a clamshell). I’m not too sure about the claim of the compact size, though.

The cover has a transparent portion that allows you to see part of the screen below, eliminating the need for an external LCD. Furthermore, if you slide the screen half-way, you’ll find that the navigation buttons will be on top, and the numerical keypad on the bottom; turn it sideways and you have yourself a conventional portable gamer with a landscape display.