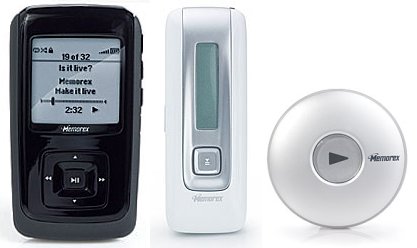 In a market clearly dominated by their glossy white offerings, it’s hard for just about anyone else to grab a significant piece of that pie. Maybe iPods are just too expensive for some people, and that’s why you’d considering the lower-end of things and look to Memorex and their quad of new digital audio players. Then again, maybe not.

The MMP8565 is the flagship of this new group, with a six-line monochrome LCD, an equalizer with six presets, and support for MP3, WAV, WMA, and WMA-DRM9/10. It either gets 12 or 20 hours of battery life (conflicting reports), and is available in 1- and 2GB varieties.

If you don’t need a display and love the form factor of yo-yos, then you may want to consider the MMP8550. There really isn’t much to this player other than its 256MB of storage. Rounding out the group is a minimalist stick (MMP3774) and a chunky player (MMP8564), both with basic displays, 512MB of memory, and power from a single AAA battery. The 8564 has an SD/MMC expansion slot, though.

I couldn’t get my hands on pricing information, but these new players have been spotted in the wild over at Target.