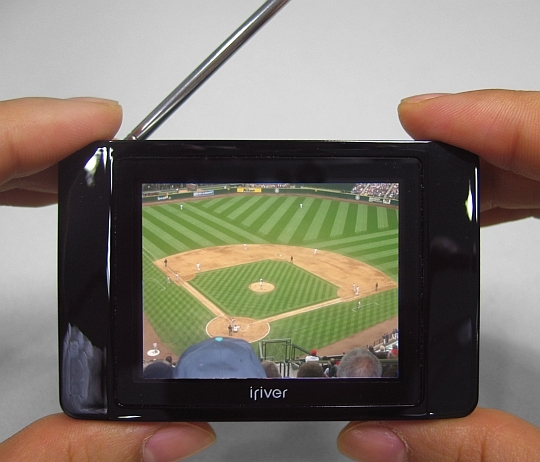 Technically this device isn’t an iRiver product, but is rather coming from its parent company, ReignCom. In any case, the Pocket TV B10 is a super small television set for baseball watchers on the go (so it seems), as well as anyone else trying to catch the latest in DMB video content.

In an attempt to keep the price as low as possible, they’ve avoided throwing in any sort of extra functionality, so you won’t find any MP3 playing bits here, nor will you be able to load it up with WMV or other video content. The only other thing the B10 brings to the table besides DMB TV is an integrated FM radio.

Moreover, they’ve kept the package incredibly small – there’s only a 2.2-inch QVGA display – which is actually perfect for cubicle workers who want to sneak a peek at the game now and then. Word is that the Pocket TV B10 will be released in Korea as soon as May 23rd, for a mere $140.