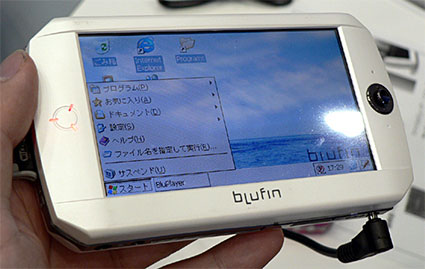 The name might make you think of poker, but the Blufin handheld by Korean manufacturer Tinnos is a pretty simple looking gadget with some rather impressive deets. Powered by Windows CE, it pulls double duty as both a personal media player (PMP) and a schedule-keeping, phonebook-remembering PDA.

The 30GB hard drive should be more than adequate for most of your “on the go” needs, but if you think it won’t suffice, then just grab a few extra SD cards for the provided slot. Alternatively, you can make use of the USB port for a thumb drive or external HDD for even more space. There’s even support for USB on-the-go and SDIO, allowing you to do after-the-fact things like GPS and Wi-Fi. Other specs include 128MB of RAM, an integrated 2 megapixel camera and an AMD Au1200 processor.

The 4.3-inch color LCD display looks like it might not be the best, but that could be an artifact of poor photography. Look for the Tinnos Blufin to hit the streets of Japan this July for $600.