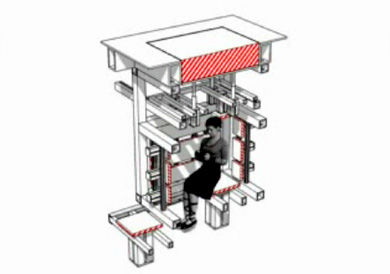 Is playing your PSP getting a little dull? Two designers, Shona Kitchen and Ben Hooker, have certainly come up with a solution for that. Their PSP SSS (Site Specific System) takes the idea of play between users and adds a physical element to it. Currently you can play with others while sitting in the comfort of your own home.

Kitchen and Hooker believe that physical interaction between players is lost this way. They imagine the building of platforms in specific areas where players could interact while playing different kinds of games. Their initial concept, for example, is a platform built over a road which would work well for racing games. User’s feet would dangle right over the traffic, adding an extra visual element to the racing game. Steel panels on pneumatic pistons would hold and contain the players, and add a physical element to the game. Players would have an extra set of buttons to control the panels of their opponents. In the words of the designers, “Game play becomes a complex distraction of extreme real space, intense virtual space and aggressive, competitive body contact.”