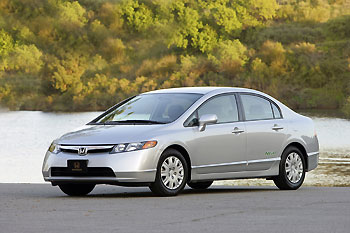 With gas prices reaching four dollars a gallon, I’m tired of being bent over at the pumps. Our reliance on the almighty barrel is far too much to bear, and that’s one of the primary motivations toward looking for alternative – cheaper – fuel sources. Well, it may already be almost half way through the calendar year, but Honda has finally released the MSRP for the natural gas-powered 2006 Honda Civic GX.

You could head out to a refuelling station to get your fill of natural gas for this 113hp four-banger, and as a result save about 30% as compared to conventional petrol. On the other hand, if you want to go 65% cheaper, you can always opt for the Phill home refuelling appliance developed by FuelMaker Corporation. Mount the Phill on a garage wall, and refuel your Civic GX using your home’s supply of natural gas.

Standard features on the new Civic GX include a five-speed automatic transmission, countless airbags, and ABS. Best of all, there are virtually no emissions from this clean burning fuel. The MSRP for the Civic GX is $24, 440, but bear in mind that you would be eligible for a Federal tax credit of $4000, in addition to the $1000 tax credit for the Phill.