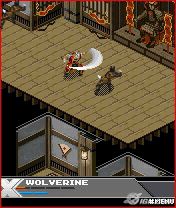 I don’t know about you, but one of the movies I can’t wait to see this Memorial Day long weekend – that I’ve been waiting for since the project was first announced – is X-Men 3: The Last Stand. I’m not a fan of that tacked on title, but nonetheless, who can resist the charm of Wolverine and crew? To accompany the surely successful release of the film, Hands-On Mobile is set to release a cellular phone game based on the X-Men 3 movie.

In it, you take on the persona of Wolverine, Nightcrawler and Iceman, each with unique mutant superpowers that you will need to make use of to get through the various levels. The story describes the death of Stryker and the reconstruction of Cerebro. Yes, fans of the series, we will be seeing Sentinels this time around. The game itself emits quite a dark atmosphere with a lot of greys, blacks, and browns.

This isometrically-oriented action game is scheduled for release in tandem with the movie of the same name.