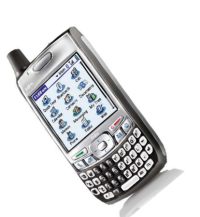 If you’re a big fan of the Palm operating system, you surely were at least a little disappointed when you first heard about the Treo 700w ages ago. After all, they ditched your beloved OS for the mobile offering from Bill Gates. Well, I guess the people at Palm keyed in on your cries of dismay and are releasing the 700p, which runs on Palm OS 5.4.9.

Sprint is picking up the handy PDA phone, and they have just announced that you’ll be able to use to 700p as a modem for high-speed data access on a connected laptop or similar device. Yes, make good use of that Sprint Power Vision and its reported peak speeds of up to 2Mbps (average is about 400-700 kbps).

Moreover, they’re quick to mention that you can also receive live television on the 700p thanks to Sprint TV. They are expecting to be the only wireless carrier to offer this option on the hot gadget.