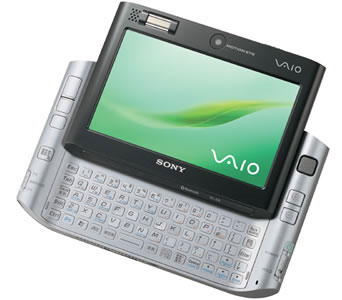 It only took a day or two to confirm that the pictures of the Sony VGN-UX50 UMPC that we have seen are actually accurate. Sony has officially announced their new device. It has a 4.5 inch WSVGA touch screen display which slides up to reveal a hidden 69 key QWERTY keyboard. It is the world’s smallest Intel powered PC which runs Windows XP. The Intel power in question comes from either a Core Solo U1400 at 1.2 GHz or a U1300 at 1.06GHz.

You have your choice when it comes to memory. Initially a 30GB hard drive was speculated about and announced, but it is also joined by the option of a flash memory model with 16GB of NAND , to be announced later in June. Though you sacrifice capacity with the flash model, it can access data three times faster and write 1.5 times faster, and since it has no moving parts it uses just 5% of the battery power of a hard drive.

The hard drive model has a battery life, thanks to a Lithium Ion battery, of 3.5 hours. The VGN-UX50 also has a 1.3 megapixel camera, Bluetooth, Memory Stick and Compact Flash card slots and Wi-Fi among the many features. It measures 150mm x 95mm x 32mm and weighs just 520 grams. The device will be in available in Japan starting May 27, but won’t hit the U.S. until July. It will start at $1,800.