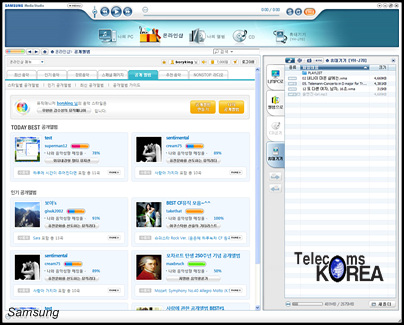 Samsung has seen how well Apple is doing with its iTunes music store and now they want a piece of the Action. The Korean company has unveiled their own version, which they have called Media Studio. It is a major upgrade of their existing Yepp Studio software. Using Media Studio, Samsung MP3 player owners are able to store, play and buy music files. Movies, video, music videos, games and animation are all planned to be available by the end of the year.

The software features the ability to analyze music files on your computer and suggest other music that will match your tastes and preferences. Samsung will work with music provider Bluecode to improve the offerings.

Samsung has focused on usability for their application in order to compete with Apple. The UI has been improved so that you can see both your PC and your device on your screen for ease of use; simply drag and drop between the two for file management.