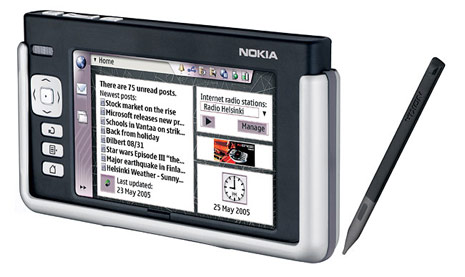 Many people gave the Nokia 770 internet tablet little chance of success when it was launched last year. They must have been wrong, because Nokia unveiled an updated version of it today in Finland. The new version runs Google Talk software, allowing users to chat with other users of the software, it also has a full screen finger keyboard which employs the touch screen to make inputting easier.

When the 770 was introduced, critics doubted that it would succeed since it didn’t use cellular networks, but instead relied upon unregulated Wi-Fi networks for access and data transfer. Because of that, the tablet does not include a phone, and many felt that the absence of a phone would turn off consumers who could do the same things as they could do on a 770 and more on a smartphone. Despite the doubts, the 770 has sold well, meeting Nokia sales projections.