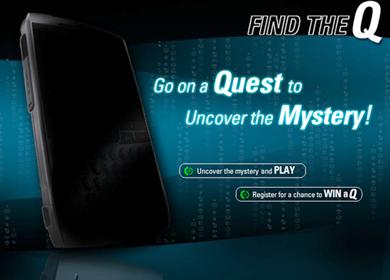 They’ve been tugging on our heart strings for too long now about the once hotly anticipated Motorola Q smartphone. When it was first announced, it elicited the drool of Moto fanboys (and girls) around the world, getting all the tech blogs to produce a steady stream of praise about the QWERTY’d machine. Well, much time has passed since then, and now after all of that drama, the Motorola Q is finally ready to make an American appearance.

They’ve launched a marketing campaign for the smartphone which almost seems mean after making us wait this long. Dubbed “Find the Q”, we’re supposed to think that this is a tie-in with the upcoming The Da Vinci Code movie starring “Life is a like a box of chocolates” Tom Hanks. I’m not going to bother listing the specs about the Moto Q, because, well, it’s been done so many times already.

What I will tell you is that this ad campaign has at least one enticing tidbit: there’s a contest that you can enter to win your own Motorola Q smartphone, avoiding the inevitable backorders and dent in your bankbook.