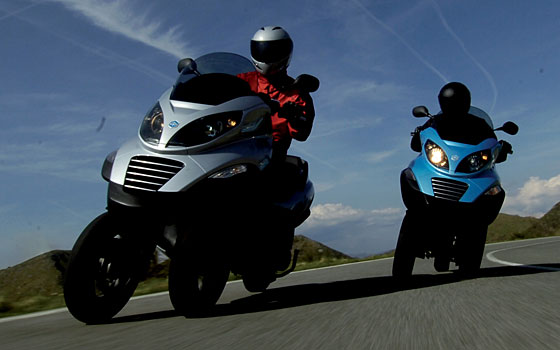 Not to be confused with the popular music compression format, Piaggio has named its latest creation the MP3. I suppose the “3” in its name makes sense, considering that it rides on three wheels, with two at the front and one in the rear, much like the GX-3 concept from Volkswagen. However, there are several cosmetic and mechanical differences that set this marvel apart.

For starters, the pair of front wheels are mounted independently, making use of a “parallelogram” suspension, allowing for motorcycle-like leaning in the corners while maintaining an incredible sense of balance.

Don’t expect a heck of a lot of jump from the 125cc version of the scooter, but the 250cc four-stroke single-cylinder rendition will certainly get your juices running.

When it comes time to park the bike, you simply activate the electro-hydraulic device which locks it up in an upright position, eliminating the need for a kickstand.

Expect the Piaggio MP3 to start selling next month in the $6600 (and up) range.