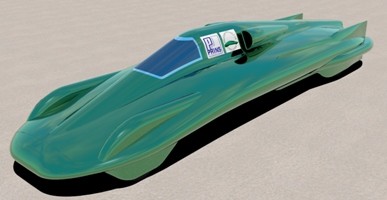 Breaking 200 miles per hour in a car is impressive at any time. When the car that breaks that barrier is powered by steam, it’s really something to talk about.

The British Steam Car Challenge is working on breaking the steam powered vehicle land speed records on three continents, starting in the U.K. Their vehicle, called Inspiration, is powered by a steam turbine. The goal is to set the records in 2006, since this year marks the 100th anniversary of the existing land speed record for steam when Fred Marriott hit 127.7 mph in a Stanley Steamer.

Unfortunately, a problem might challenge the project’s ability to meet their self-imposed deadline. Boiler and dynamometer tests have revealed problems with boiler efficiency in the Inspiration. Solving that problem meant that the drive train had to be redesigned so that everything would fit in the vehicle without adversely affecting the aerodynamics of the body. If they can get everything completed and go for the record this year they will.