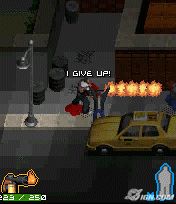 I remember playing the original True Crime: Streets of LA on my Nintendo GameCube, and I had a blast with the Grand Theft Auto like gameplay, but with a good cop / bad cop dilemma built into the mix. You see, you take on the persona of a police officer on the edge and it’s up to you whether you simply arrest the bad guys, or bust a cap in their you-know-what.

Well, the follow-up, New York City, hit the home consoles to limited fanfare last year, but that’s not going to stop Hands-On Mobile from porting the title over to everyone’s cellular phone. You get a three-quarter view of the action, with walls becoming transparent as you near them so you can see all the crooks around the corner. The free-flowing nature of the game will appeal to many people, but the editors over at IGN found that the demo version being showcased at E3 “looked a little bland.”

A firm release date has not yet been released.