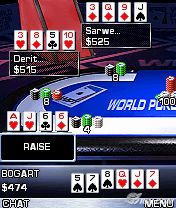 Poker has been around for ages, back to the days of Huck Finn and the riverboats (maybe even earlier), but it has really caught on in popularity these past few years, thanks largely to organizations like the World Series of Poker, the World Poker Tour and WalMart pushing sales of poker chips. Well, Hands-On Mobile has the lucrative WPT license and they’re ready to produce another card playing title for your mobile phones.

Instead of the standard No Limit Texas Hold ’em that everyone and their mother is playing these days, they’ve opted for a different game. No, not even Crazy Pineapple or Omaha. Instead, the latest “shuffle up and deal” game is traditional 7 Card Stud. The user interface looks like any other standard poker title, but the “trademark presentation tics of the televised World Poker Tour” will make this title a hugely popular download. Who doesn’t like Mike Sexton and Vince Van Patten?

No word on pricing or a proposed launch date.