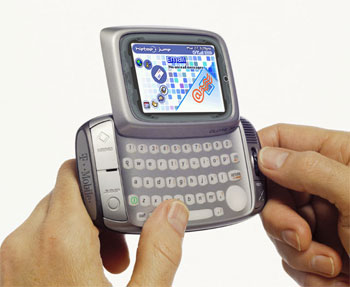 Well, after all the teaser pics and an FCC appearance, it seems like we’re getting that much closer to a launch of the Sidekick III from the people over at T-Mobile, because it’s predecessor, the Sidekick II has officially been pulled off the shelves.

A third party dealer called in to put in his weekly order for phones, and was told that Catherine Zeta Jones and friends weren’t going to ship him any more Sidekick IIs. Although nothing has been confirmed yet, this dealer – known only as “A.J.” – did say that T-Mobile reps mentioned a mid-June launch for the third incarnation of the Sharp-made portable text messaging machine.

This could mean that if you’ve been itching to jump on the Sidekick (or the Hiptop as it is called in Canada, through Fido) bandwagon, you might be able to grab a Sidekick II on the cheap as retailers try to clear out their stock before the imminent arrival of the Sidekick III with a 1.3 megapixel camera, expandable memory (miniSD), and Bluetooth.