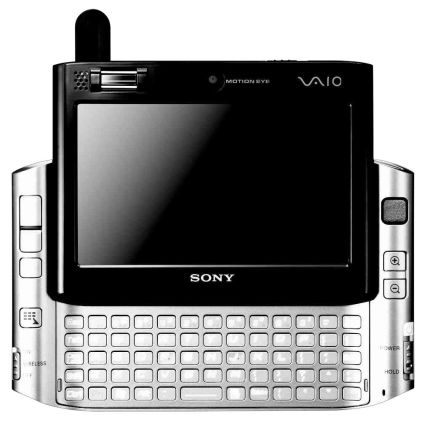 The Samsung Q1 ultramobile PC (UMPC) flew off the shelves at Best Buy, so maybe this whole Origami thing won’t be an overpriced flop after all. Well, the Sony Vaio line of laptops has a reputation for being among the thinnest and lightest in the big brand industry, and now it seems that the next Vaio is jumping onto the bandwagon and sporting a UMPC form factor.

Sony has launched a teaser campaign for the Vaio UX, and these hot pictures (more from the provided link) certainly indicate some appealing features. Most attractive is what appears to be a good range of wireless connectivity options, including Bluetooth, WLAN, and even WWAN. Sony is sticking with the MemoryStick Duo format, throwing in a slot for the media. There also appears to be a camera on-board, given the “capture” button, as well as a fingerprint reader. The slide-out QWERTY keyboard is a nice touch.

We’re still waiting on some hard facts from Sony, particularly regarding the operating system (a possible return to PalmOS?), hard drive, and processor. Of course, no word on pricing or availability either.