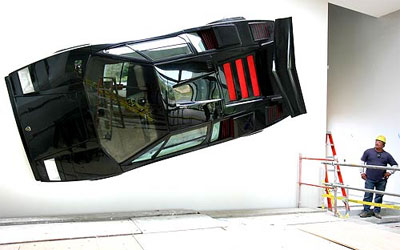 Most people would kill to have a Lamborghini Countach on their driveway, but a California millionaire has stuck one on his wall. Richard Moriarty bought a 1974 Countach 10 years ago from a collector for $60,000. He drove it for several years, but the maintenance got to be too much. The gas tank had rust damage, the engine kept stalling, and Moriarty was becoming best friends with the tow truck driver. Instead of selling it or leaving the beautiful car in the garage for no one to see, Moriarty has attached the car to the wall of his Newport Beach estate as a piece of industrial art. It will certainly be a conversation piece.

Before you get any ideas about getting invited to the house and then driving away with the car when your host isn’t looking, you should know that the engine isn’t in the car anymore. Moriarty pulled the engine out and turned it into a coffee table instead.