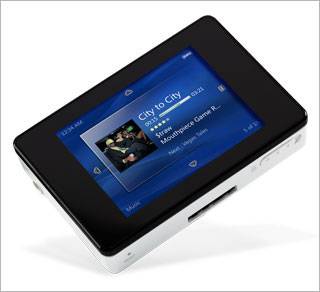 Appearances may make you think that the new Clix from iRiver is simply a re-badged U10, and that could very much be the case, but that doesn’t mean you should ignore this portable media player altogether, because it is quite the tight little package and a formidable competitor for the iPod nano. Now officially posted on the company’s website, the iRiver Clix sports 2 gigabytes of storage space and an “ultra-bright” 2.2-inch color display.

Not only will you be able to rock tunes – MP3, WMA, and even Ogg Vorbis formats – but this unit also supports video playback (MPEG4 simple profile at 15 frames per second) in addition to some simple Macromedia Flash-based games (which are available for download). A built-in digital FM radio tuner, voice recorder, and text viewer round out the features. The battery life is quite nice as well, at an estimated 25 hours per charge.

Available for order right now, the iRiver Clix comes attached with a $200 asking price, right in line with the nano.