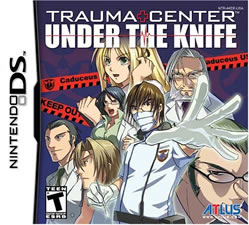 Even though E3 has wrapped up and the busloads of gamers have departed from Los Angeles, the steady stream of video game-related news keeps trickling in. If you had the chance to experience Trauma Center: Under the Knife for the Nintendo DS some time back, you will be ecstatic to hear that you can go even more precious with your pseudo-surgeon skills with the followup – Trauma Center: Second Opinion for the upcoming Nintendo Wii (formerly known as the Revolution).

As you may already know, the controller setup for the Wii is largely designed to be motion sensitive. You control the action in the game by moving the Wiimote (as it has been dubbed) toward and away from the screen, tilting it, and other such movements. Your actions will have to be very precise though, given the nature of Trauma Center, an emergency room simulation. In fact, the controller acts as a scalpel in a “medical drama situation”, and sometimes doubles as a defibrillator paddle as well. Looking for unconventional gameplay? This just might be your cup of tea.

No official word on availability, but the expectation is that this game will be released within the Wii’s “launch window” around November of this year.