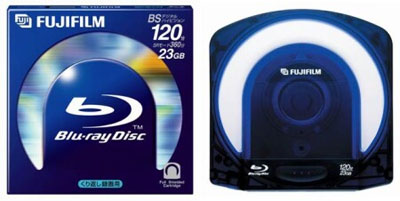 Fujifilm will be making their Blu-ray media available in the U.S. next month. With the increase in demands for media storage fueled by, among other things, high definition television, the company sees a strong and growing market for their high capacity recordable media. Blu-ray drives will increasingly appear in consumer electronics as the backers of the technology try to get a jump on their HD-DVD rivals. The Fujifilm Blu-ray discs will have a storage capacity of 25GB. They will be available in a write once format, called BD-R, or a re-writable format called BD-RE. Both discs can be used in Blu-ray drives with 1-2X writing speeds. The discs will be available in the U.S. through existing Fujifilm reseller networks. No word yet on price.

Though the Blu-ray media from Fujifilm is new to the U.S., it is not new to the company. They have had cartridge based re-writable 23.3GB Blu-ray discs available in Japan since 2003.