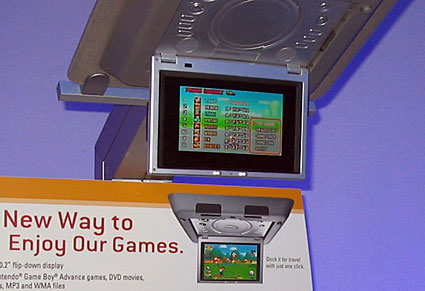 Clearly targeted for families with younger children, the Visteon portable DVD/GBA player made an appearance over at the Nintendo booth at E3 2006. The idea is that the monitor can be used to keep your kids occupied while on longer road trips, either watching the latest Spongebob Squarepants DVD or playing the hottest new Game Boy Advance title (whenever those actually come out).

Well, the guys over at Joystiq had a chat with company reps at E3 and they found out that the Visteon unit will start selling during the first week of July. Moreover, based on these live pictures, Game Boy Advance games do not fill the entire screen during gameplay, which is an unfortunate waste of space. Speaking of waste, the Visteon portable DVD/GBA player doesn’t come cheap.

To get one of these things into your minivan (including installation), you’re looking in the neighbourhood of $1200. Keep in mind that a separate GBASP or Micro can be had for well south of a Benjamin. I’d just go for a PSP, that should keep them quiet and save you a bundle.