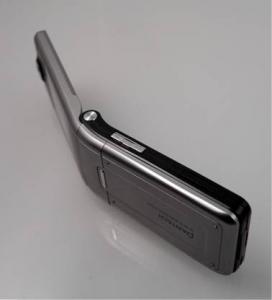 Shows how much I know about kids these days, because apparently having biometric security (a fingerprint reader) gives “a sense of urban cool.” Pantech is set to release the all-new PG6200 onto the world, a sleek package with a healthy host of features.

The tri-band GSM clamshell, while being “urban cool”, is being marketed at business executives, which, in my mind, seem at the opposite end of the spectrum than the hip cats kickin’ it in the streets (I’m so not with it). You probably won’t be satisfied with the 20MB of internal memory, so as with most other handsets on the market, you’ll need to invest in a microSD card for expansion. The 2 megapixel camera is pretty sweet, as is the integrated music player.

Bluetooth comes standard, of course, but it is the biometric technology that sets this thing apart from the crowd. Use the fingerprint reader to access lock-in keys and memory dials. No word on pricing, but it seems that Pantech is ready to start shipping the PG6200 to Taiwan, Russia, and Hong Kong.