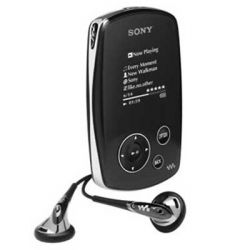 SE mobile phones aren’t the only Walkman game in town it seems, because the guys over at Sony are set to continue the line with the NW-A1200 MP3 player. For starters, you get an ample eight gigabytes of storage on this giant bean slayer, other than that, they haven’t added much to the package compared to previous iterations of the Walkman Series.

A welcome touch is that they’ve packed in 20 hours of battery life on a single charge, so at least you’ll be able to get through a day or two before having to stick a plug in the wall. Other features include the SonicStage CP software which, incidentally, comes with support for the AAC format that Apple loves to use for their iPods.

They’ve already released the NW-A1200 upon the Japanese market for a not-so-cheap $470 USD, so we had better keep our fingers crossed for a significant price cut before it hits the shores of North America (and the rest of the world, for that matter) next month.