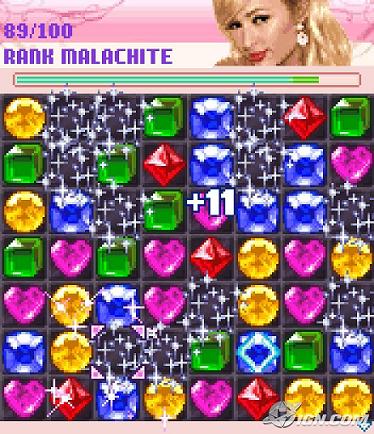 If anyone knows about precious gems, it’s got to be Paris Hilton and her ever growing empire. We already heard about the deal that was inked between Gameloft and the girl that made an everyday saying out of “That’s hot”, and now we’re starting to see the first fruits of that agreement. Paris Hilton Jewel Jam is a simple time-wasting puzzle game for mobile phones.

At first glance, this title – unveiled at the E3 in Los Angeles – bears a striking resemblance to another popular game found on countless PDAs, handsets, and just about every free video game site online. Of course, I speak of the almighty Bejeweled. While this appears to be just another game that cashes in on a popular franchise… or a pretty girl, as the case may be, but Jewel Jam actually keeps you interested and is excellent for killing time while waiting at the bus stop. Best of all, as the gems clear off the field, you expose a series of photographs of Miss Hilton for your hormone-driven pleasure.

Look for Paris Hilton Jewel Jam to be available for download some time this summer.