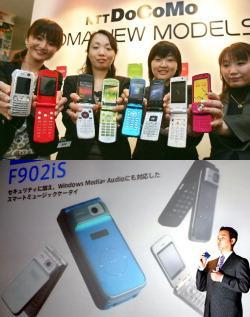 If you happen to be walking through the streets of Tokyo, you’ll soon notice that the good people over at NTT DoCoMo are carrying a lot more phones these days. That’s because they’ve just unleashed no fewer than eight new handsets on the world, including the new N902iX HIGH-SPEED which comes packed with HSDPA technology.

That’s not to say that the other seven phones should be completely ignored, because they come with some pretty nifty features that many haven’t even heard of this side of the Pacific. These include everything from Osaifu-Keitai e-wallet services and Omakase Lock data security to Chaku-moji ringback messages and ToruCa mobile shopping information. You can probably figure out what some of those do, if not the specifics. Other highlights include PlaysForSure support, Push-to-Talk, and home theatre remote controls.